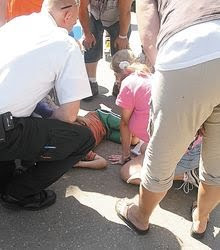 One moment a 5-year-old boy was waving to the crowd lining the road from a float during the North Dakota State Fair parade Saturday. Then he tripped and fell while apparently trying to jump off the float and one of his legs was run over by the wheel of the trailer. The crowd gasped in horror as the boy wailed in pain and then said he couldn't move his leg. However, the child was alert and conscious when paramedics splinted his leg and loaded him onto a stretcher to take him to the hospital.

The accident, which occurred at about 11 a.m., was the second of the day. A short time earlier, on the Burdick Expressway viaduct, a 7-year-old girl was injured when she attempted to step off a float and fell to the pavement. Both tires of the dual-axle trailer carrying the float ran over the girl, police said. That accident also happened about 11 a.m. The girl was taken to Trinity Hospital where she was treated for her injuries.

The child injured on the fairgrounds was riding on the trailer with several other youngsters. Minot police said there have been similar accidents in past years, though they couldn't remember an exact number.

Both accidents are under investigation, the one on the viaduct by the Minot Police Department and the one on the fairgrounds by the Ward County Sheriff's Department. Neither child was identified by law enforcement Saturday.

Posted by Ron Melancon at 8:52 AM No comments:

What started as a day of sunshine and celebration took a turn for the worse with a float accident injuring a St. Michael boy.

Hundreds of parade watchers lined Main Street and Memorial Drive in Rogers Saturday, June 26, for the annual Rockin' Rogers Days parade. Rogers Police Chief Jeff Luther barely completed the parade route from his spot near the front of the line when he, along with several other police and rescue workers, responded to a parade float accident.

Reportedly, a nine-year-old boy was sitting in front of the wheel well of a trailer on the Hampton Inn float. As the driver made the right turn from Main Street to Memorial Drive the boy's foot was caught under the wheel and he was pulled off the trailer.

Witness reports varied stating the trailer wheel rolled over the boy's legs, chest and head. However, police were unable to confirm or deny these reports. Dan and Kathy Wagner were sitting at the corner watching the parade and witnessed the incident. Dan Wagner said the whole thing happened so fast the boy didn't yell or make a sound but the crowd did once they saw what happened. He perceived that the driver stopped immediately upon hearing the crowd's reaction preventing further injury.

Within minutes, several police responded, transferred the boy to a spine-board and transported him to North Memorial Hospital. Minutes later Chief Luther escorted the boy's mother, who was also on the float, to the hospital.

While police commented the boy appeared in stable condition as he was transported, Luther issued a statement Wednesday, June 30, confirming the boy sustained some lacerations to his right ear and assorted abrasions to his hands and knees.

"Considering the potential devastating injuries that he could have sustained, the boy is both fortunate and resilient," said Luther. He went on to say the injuries might require further corrective or cosmetic surgery.

He called the incident a rare and unfortunate circumstance. However, the situation will be including in the debriefing of Rockin' Rogers Days to occur between the police department and the Rogers Lions.

"We had some weather events that required temporary evacuation to the Community Center, the parade incident and some other situations throughout the weekend," he said. "Our first priority is the safety and welfare of visitors to Rockin' Rogers, so it only makes good sense to review the event afterwards to try improving upon our ability to be prepared in future years."

Luther said incidents related to alcohol were significantly reduced compared to the previous year.
Posted by Ron Melancon at 8:47 AM No comments:

Child run over by float in Molalla parade 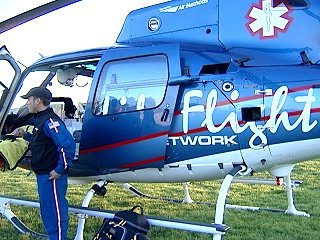 MOLALLA, Ore. – A Life Flight helicopter was called in to a July 4 parade in Clackamas County, whisking away a boy run over Sunday by a parade float.

Molalla Fire Public Information Officer Denise Everhart said a 12-year-old boy was trying to catch candy thrown from a moving float in the Molalla Buckeroo Parade. She said the float was composed of a trailer with a dual wheel.

Everhart said the boy's foot first became caught in the wheel. Then, the float rolled over him.

The accident was reported to Clackamas County 9-1-1 dispatchers at 11:46 a.m.

The annual Fourth of July festivities, including the Molalla Buckaroo Parade, started Sunday at 9:30 a.m. This "Giant Street Parade" runs down Main Street in Molalla – a town of 7,800 residents about 30 miles southeast of Portland.

Everhart said the boy was conscious and alert after the accident. However, she said he "definitely" suffered a broken leg. She also said he was complaining of pain in his lower abdomen.

As a precaution, the boy was transported to Legacy Emanuel Hospital by Life Flight, Everhart told KATU. We have sent a photojournalist to the scene, and will follow with further details as they are available.

UPDATE: A spokesperson for Molalla Fire tells us this parade does have a policy of handing out candy from buckets, rather than throwing the candy from floats. He said the boy was working the float that ran over him – chauffeuring candy from the float to the crowd in a bucket.

Posted by Ron Melancon at 8:33 AM No comments: